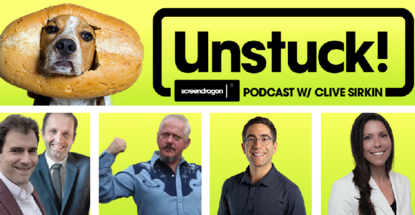 November on Unstuck concluded with a neurodiversity expert which was a fitting end to an incredibly diverse range of guests and topics this month. We had e-commerce experts, start-up success, a punk rock legend, a tasty home cooking adventure, and a special leader that has broken down barriers to achieve her position.

On episode 31 and 33, we heard about thriving start-up ventures. Interestingly, they followed very different paths to success. Chris and Oskar were established leaders in the e-commerce space before they decided to go their own way. David Rabie took a different route. He developed his company using knowledge collected in the classroom in addition to experiences in the field. These great episodes were sandwiched in between two wonderful minds on episode 32 and 34. Jon and Samantha have led very different lives but are not afraid to be true to oneself. Here are the main themes and topics we discussed on Unstuck in November!

Chris and Oskar are the founders of firstmovr, an e-commerce ‘satellite of excellence’. Moving quickly and not getting stuck are the fundamental principles of this duo’s consultancy plug in. Like any fast movers, Chris and Oskar are ‘pioneers, troublemakers, and disruptors’. Through their hands on advisory practice they’re forcing companies to confront reality in the e-commerce space. People understand that digital commerce is here to stay, but according to Chris “Companies struggle to find the purpose and see the change that is on the horizon, ”this can have a negative impact on all forms of marketing “CPGs are often built in a siloed way. It’s then difficult to tell an end-to-end story holistically.”

firstmovr work with more than sixty CPG companies to help them understand e-commerce better and stay on top of trends. Through close collaboration with clients, they are building playbooks that are current but agile. Understanding how offline experiences influence online sales is one of the first lessons. Oskar sums up how this misunderstanding can deliver false insights “price architecture may indicate e-commerce is failing, but what about other interactions?” Chris and Oskar have ‘8 levers for change’ that they use to get buy in from leadership and deliver results. Find out what these levers are and get your firm e-commerce ready by listening to Chris and Oskar below!

Jon Langford (Artist, Designer, Musician at The Mekons, The Three Johns and more)

Our second guest in November was a shining symbol of the Unstuck philosophy. Most people will know Jon Langford through his iconic punk band, The Mekons. Formed in the 1970s, the iconic British rockers are one of the longest running punk rock groups. Not bad for a group of musicians that apparently ‘couldn’t play their instruments’ in the early days.

The Mekons are in their sixth decade of gigging and Jon attributes their endurance to originality. He explains how record labels and the music press gave them a hard time, but they never changed who they were. As Jon says, “The best times were when the band were fully in charge of what they were doing”. The rock icon firmly believes that the band would not have lasted so long if their first record was a success. Setbacks merely inspired them to keep going and they always stayed true to the Mekons brand.

In addition to an outstanding music career, Jon has forged more creative paths. The second half of Jon’s career has touched other forms of art such as painting, graphic design, and fashion. Jon believes that art and music are closely aligned when it comes to original thinking, “People are afraid to declare something as good until a superior validates it.”. He has incorporated guerrilla marketing tactics to help promote his art career. In the marketing world, his approach would likely fall under ‘direct marketing’ tactics. Hear more about Jon’s approach to marketing and get a view into a rocker’s world in this melodic episode!

Listen to Awareness of Sounds

We were introduced to a mouth-watering growth story on episode 33 of Unstuck. Dave Rabie took a winding road to get to where is today. He taught English in China, managed a frozen yoghurt chain, and worked in a PR firm. While Dave wasn’t always sure where he was heading, he was always aware of his two passions – business and food. At Booth Business School in Chicago he realised he could have a career that combined both.

Technology wasn’t Dave’s strong point but he developed those skills while developing an app during his studies. This was the final piece of the puzzle for Dave’s business idea. Like many people that work outside the home, he was struggling to find time to cook a decent meal in the evening. He realised he could tackle this problem with his experience in the food industry, his entrepreneurial spirit, and his new found tech skills. At this point, we’re introduced to his impressive food delivery and home cooking solution, Tovala!

Tovala delivers fresh ingredients to your home but also cooks the ingredients for you! Using the Tovala smart oven (a prerequisite for the food delivery service) and a QR code you can prepare a home cooked meal with no effort. Due to the sophisticated nature of the product, it was difficult for Tovala to find market fit. However, once the food service realized their positioning the sales numbers exploded. At one point in 2019, the company was growing 10% – 20% every week! Tovala now employs more than 130 people and Dave has needed to become a leader in addition to an entrepreneur. Tune in below to hear how Dave and Tovala combined software, hardware, and knowledge in this appetizing adventure!

Samantha Kolkey is a leader that doesn’t fit your typical manager profile. She overcame the odds to combine an Executive position and a neurodiverse disposition. It was an agonising path for Samantha to get to where she is today. At school, she found learning and homework very difficult. Everything seemed more challenging and enduring than it should have been. Samantha also experienced difficulty interacting socially and being herself in social circles. Naturally, this resulted in stress and anxiety for the teenage Samantha. This meant that her schooldays were a long arduous slog. Her parents brought her to various consultants and medical experts to see if they could help. Different doctors delivered varying conclusions – anxiety, depression, bipolar. None of these diagnoses resonated with Samantha. As a result, no relief was found.

Things improved once Samantha left school and attended college. She felt like she “came in with a blank slate” and that people were “more accepting”. It wasn’t long before she fell into destructive practices again. Samantha reverted to people pleasing and masking her unique personality traits. It wasn’t until grad school that she received a diagnosis for ADHD and finally “things made sense”. The diagnosis was liberating and enabled Samantha to be herself and learn more about neurodiversity. As she says “the neurodiversity model focuses on there not being a right way of thinking. Everyone is wired differently.”

Samantha is now leading an entirely neurodiverse team at Options for College Success. As a neurodivergent leader, it can take extra effort. She is passionate about creating a safe space for her colleagues though. Samantha is investing in talent and removing stigma around neurodivergence. Find our more about neurodiversity and Samantha’s inspiring journey below!